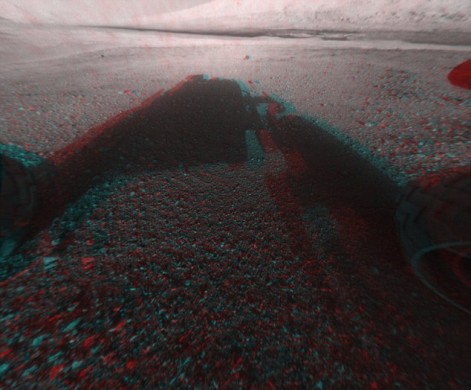 The martian landing site of NASA’s Curiosity rover, which landed on Mars on Aug. 5 PDT (Aug. 6 EDT), is seen in 3-D colours in this picture released by NASA August 7, 2012. The anaglyph was made from a stereo pair of Hazard-Avoidance Cameras on the front of the rover. The image is cropped but part of Mount Sharp, a peak that is about 3.4 miles (5.5 kilometers) high, is still visible rising above the terrain. This image was captured by the rover’s front left Hazard-Avoidance camera at full resolution shortly after it landed. It has been linearized to remove the distorted appearance that results from its fisheye lens. REUTERS/Handout (UNITES STATES – Tags: SCIENCE TECHNOLOGY) FOR EDITORIAL USE ONLY. NOT FOR SALE FOR MARKETING OR ADVERTISING CAMPAIGNS. THIS IMAGE HAS BEEN SUPPLIED BY A THIRD PARTY. IT IS DISTRIBUTED, EXACTLY AS RECEIVED BY REUTERS, AS A SERVICE TO CLIENTS